When I was a 7th grade English teacher, and we had a Poetry unit, I had my students write down the lyrics to their favorite songs to share in class. Then we talked about the lyrics in terms of poetic sense, storytelling, word usage, and emotional resonance. 7th graders love music, but mostly they don’t think they will like poetry (they usually groaned when I announced the Poetry unit).

It was kind of hard not to sing the lyrics, but we made ourselves just speak the lyrics, and had some good laughs over the repetition and corniness of some songs. The whole class would usually burst into song at some point during several readings of the lyrics. It was really kind of fun.

I was reminded of this yesterday when I visited a special exhibit about the Rolling Stones at Navy Pier in Chicago. It was an amazing collection of their guitars, concert posters, photos, videos, clothing, and music. There was one section that had the REAL notebooks that were kept by various band members – notebooks where they wrote down their song lyrics. By hand, with pencils and pens. 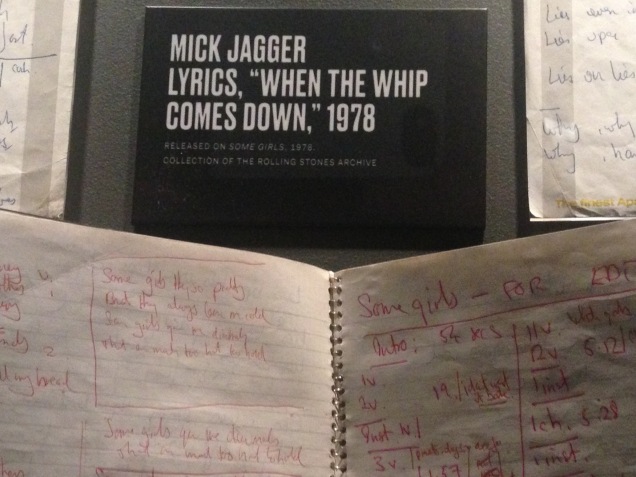 (This essay appeared in 1990 in The Beach Reporter. Ringling Bros. just this week announced it is closing down, but Circus Vargas appears to still be going strong. I don’t have any desire to see a circus now, as I know the animals lead mostly hellish lives, but I’m glad I have the memory of going to them as a child and as a parent.)

Laaaddeeezz and gentlemen… We live in a time when we have seen a man walk on the moon. Hollywood has outdone itself entertaining us with the most outrageous car chases, the most fiery explosions, the biggest stars.

Then why is it that with all this glitzy entertainment at our fingertips, we still turn once a year to one of the oldest forms of entertainment – the circus? Long before there were movie theaters, television, even before radio, circuses were one of the big events of the year for family entertainment. And judging from last week’s crowds at Circus Vargas, the circus is still the greatest show on earth. END_OF_DOCUMENT_TOKEN_TO_BE_REPLACED

(Click the link below to read my humor essay originally published in Main Line Today magazine.)

(Originally published in the Philadelphia Inquirer 1/26/05)

I remember when I first heard there was going to be a golf channel. I chuckled to myself and thought, “Now there’s a dumb idea.” I thought the same thing about cell phones.

Not to cast aspersions on the sport, but do we really need an entire channel devoted to guys wearing plaid pants and chasing a little ball around? What could be next? The bowling channel? Perhaps ping pong or curling?

Now it seems we might be on the verge of a poker channel. And again, I just don’t get it. My husband and college age son seem endlessly entertained by watching poker on TV, and I shudder to think if it was available to them twenty-four hours a day. To my mind you might as well sit around and watch grass grow.